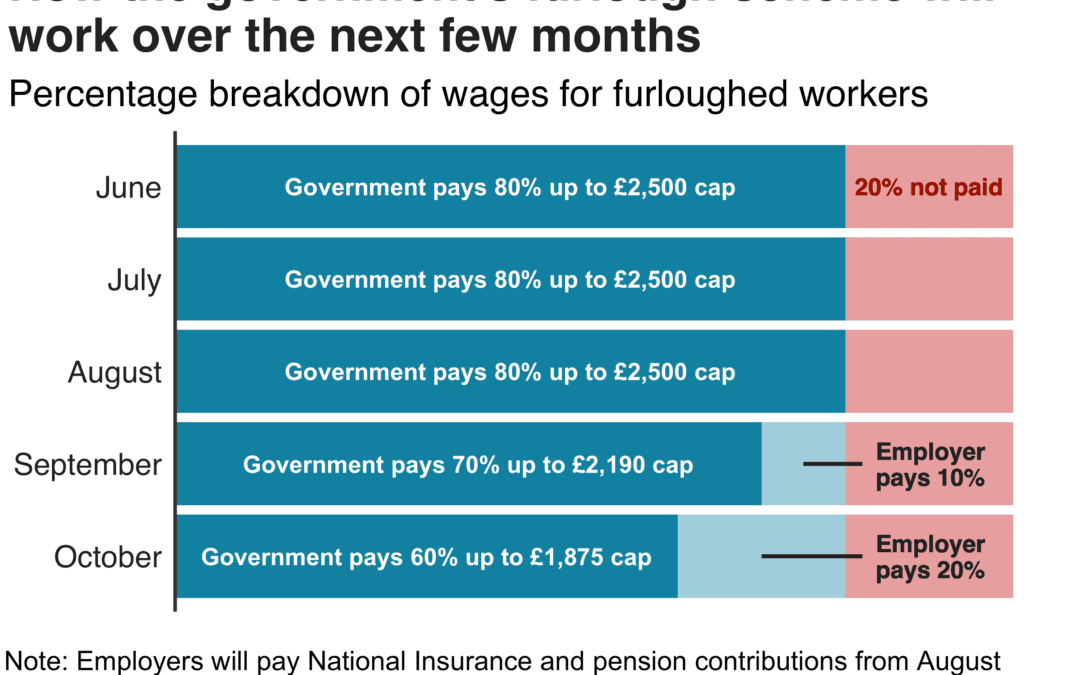 The Government have listened and the new Furlough Scheme has moved forward to 1st July 2020.

Businesses will have the flexibility to bring furloughed staff back part time. You can decide the hours and shift patterns staff will work on their return, which might help with social distancing and keeping staff skills up to date, however you will be responsible for paying their wages while in work.

From August, the level of government grant provided through the job retention scheme will be begin to taper down as people return to work.

That means that in June and July the government will continue to pay 80% of people’s salaries. However, in the following months, businesses will be asked to contribute, but employees will continue to receive the 80% of salary.

To enable the introduction of part time furloughing, and support those already furloughed back to work, claims from July onwards are restricted to employers who are currently using the scheme and previously furloughed employees.

The scheme will close to new entrants on 30 June, with the last three-week furloughs before that point commencing on 10 June.

This website uses cookies to improve your experience while you navigate through the website. Out of these, the cookies that are categorized as necessary are stored on your browser as they are essential for the working of basic functionalities of the website. We also use third-party cookies that help us analyze and understand how you use this website. These cookies will be stored in your browser only with your consent. You also have the option to opt-out of these cookies. But opting out of some of these cookies may affect your browsing experience.
Necessary Always Enabled
Necessary cookies are absolutely essential for the website to function properly. This category only includes cookies that ensures basic functionalities and security features of the website. These cookies do not store any personal information.
Non-necessary
Any cookies that may not be particularly necessary for the website to function and is used specifically to collect user personal data via analytics, ads, other embedded contents are termed as non-necessary cookies. It is mandatory to procure user consent prior to running these cookies on your website.
SAVE & ACCEPT